I’m a former Navy officer from San Diego and read about the TOLOVANA reunion in a recent issue of VFW Magazine. You were named as the contact. Although I did not serve on the ship, my ship, the destroyer escort/fast frigate USS BRADLEY (DE-1041) had many an unrep from the TOLAVANA while in Westpac from Jan-July 1970. We experienced an event that brought the two ships together in a classic sea story!

I don’t know if you’ve already held your reunion, but if not, please feel free to share the following story with your former shipmates:

From Jan-April 1970, the BRADLEY steamed all over Westpac doing carrier plane guard, naval gunfire off of Vietnam, and other usual destroyer-type assignments. We steamed on those new JP-5 fueled engines that sounded like a jet plane, and we needed gas a lot. TOLAVANA provided that gas many times and was always there on time, highly professional, and the crew had a great sense of humor!

In April 1970, the Soviet Navy’s Pacific Fleet surprised us all with a massive fleet sortie and deployment to the area north of the Philippines to test our responsiveness. The BRADLEY happened to be in transit that day and was the nearest U. S. Fleet unit to the Russian task force. We were immediately ordered to drop everything and chase down Ivan! We were not topped off with fuel and supplies and needed replenishment badly but finding the Russians came first.

We ran out of many things but the most critical was toilet paper. We used it all up! Our supply officer sent desperate messages to find someone to bring us some APP. Curiously, in a routine unrep a few weeks before our dilemma, we were alongside TOLVANA when a freak wave tore one of our large rubber fenders off. An alert boat crew on the TOLOVANA snagged the errant fender as it bounced down the TOLOVANA’s starboard side. That was the last I heard of that fender until our tasking to chase the Russians.

The Supply Corps heard our plea and Seventh Fleet tasked TOLOVANA to find us and bring gas, groceries, and APP to our empty holds! We soon were charging up TOLOVANA’S starboard side to settle into our unrep position, lines were shot over, and fuel and cargo lines were rigged. Once we were topped off and about ready to break away, the TOLOVANA made the gesture of the century: They sent over on the highline our lost bumper—it was 3 ft. long and 2 ft. wide—and it was beautifully wrapped in white canvas and artistically painted as a giant roll of Scott’s Toilet Tissue! I’ve attached a picture of me on our O-1 level after receiving the cargo. 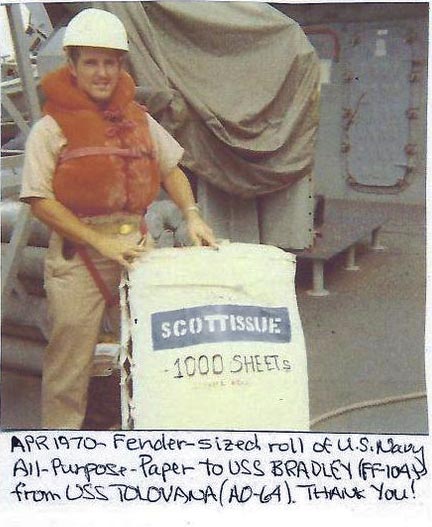 That gesture sure raised the morale of our entire crew---as did the actual toilet paper supply—and forever emblazoned into my brain the image of that beautiful big gray grocery store and gas station USS TOLAVANA (AO-64)!

Another great remembrance of the TOLOVANA was her Navy operational code name. As you may know, the Navy used to give each ship a unique coed name to use in operations. The BRADLEY had two over her career: First, Comet Express, then Ivory Coast. The use of those codes was dropped in 1970 because their use wasn’t fooling anybody, the Russians or us! Everybody, even the bar girls in Olongapo and Sasebo knew all the ships’ code names. So the Navy started using two-letter, daily changing codes. But the original code names became a fond remembrance for ships’ crews, and gave each ship her own personality. The BRADLEY crew, however, always thought the TOLOVANA had the all-time best-sounding and cool code name. We would hear her OOD over the tactical radio circuit during an unrep: “Ivory Coast, this is JOHN LAW WHISKEY, repeat JOHN LAW WHISKEY! You can’t say that code name without doing it in a rough-cut, pirate-like growl!

Suffice it to say, we destroyer sailors remember with great fondness our fellow sailors aboard USS TOLOVANA, Champion Fleet Oiler, who worked their fantails off day and night to keep us supplied with beans and gas. Thanks, guys, and I wish you all fair winds!